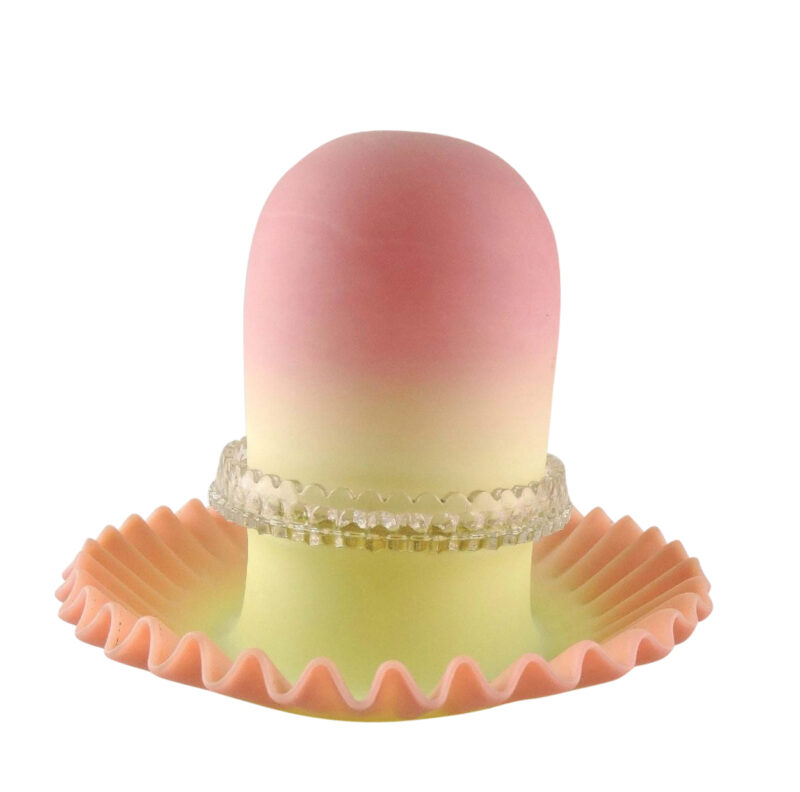 A VICTORIAN FAIRY LAMP in QUEEN’S BURMESEWARE by THOMAS WEBB for S. CLARKE, 1887

This enchanting Burmese glass lamp is called a “fairy light” because the pink and yellow glass glows inside when lit, like a fairy caught in jar.  At least that’s what the Victorians thought!

The lamp consists of three original and intact pieces: a domed shade, that graduates in colour from a rich, warm rose at the top, to a pale butter yellow at the bottom; a pressed glass, clear “crystal” liner, inside the base; and  a saucer stand, with an open cylindrical centre, deepening in colour from pale yellow in the middle to the same rose as the top of the shade, along the raised, frilled, outer rim.

The crystal dish liner is meant to hold a tea light; the saucer; small fruit or floating flowers.  As you can see from the photos, it is beautiful when lit.

The distinguished English glassmakers, Thomas Webb and Sons (1837-1990) made this Queen’s Burmese-ware lamp to be sold by S. Clarke, who was a candle manufacturer. Clarke patented  the design of “fairy lamps” for use as night lights.  This type of glass is referred to as “Queen’s” Burmese ware because Queen Victoria, the reigning British monarch, at the time, was especially enamoured of the warmly coloured glass.

It’s rare to find an intact fairy light in such exceptional condition. If you collect English glass or fairy lamps, this would be a glorious addition to your treasures.

Marked on the interior rim of the cylinder saucer centre, on one side, in circular black overprinted marks, with: ” S. Clarks”, then,  “Patent,  Trademark, Fairy”.  On the opposite side, in the same manner: an outside ring with “Queens Burmeseware Patented” and on the interior, “Thomas Webb and Sons”, c. 1887 (pictured).